Pool of Radiance is a role-playing video game developed and published by Strategic Simulations, Inc (SSI) in 1988. It was the first adaptation of TSR’s Advanced Dungeons & Dragons (AD&D) fantasy role-playing game for home computers, becoming the first episode in a four-part series of D&D computer adventure games. The other games in the “Gold Box” series used the game engine pioneered in Pool of Radiance, as did later D&D titles such as the Neverwinter Nights online game. Pool of Radiance takes place in the Forgotten Realms fantasy setting, with the action centered in and around the port city of Phlan. (Wikipedia)

Back in the early eighties, entertainment options felt limited.  We had the Atari 2600, which gave us a selection of arcade like games.  Personal computers cost a small fortune, so few people had access to the deeper game experiences it provided.  For those of us into deep stories and imaginative tales of heroics, we looked to Dungeons and Dragons as our main source of fun.  Playing with friends, some dice and a copious supply of paper and pencils, we created parties of adventurers who took on horrific monstrosities and conquered the deepest dungeons.

Dr. Strange has a quest for us!

In 1988, SSI released Pools of Radiance for several types of computers, including the Commodore 64, which my friend had.  Somehow, with less than a megabyte or two to work with, SSI managed to bring nearly the entire Dungeons & Dragons experience to our PCs.  The game not only astonished us for its accurate portrayal of the pen and paper experience, but due to numerous other elements completely ahead of its time.

You create a party of six adventurers, using the 1st edition of Advanced Dungeons & Dragons rules.  For new players who never played, learning these rules may become a barrier to entry.  Arbitrary rules, such as level limitations on certain race and class combinations, can completely hamper the unprepared player.  Score range from 3-18 for most characters, yet strength has a percentile that comes in to play for those fighters with an 18 in that attribute. Gender and race combinations also have limitations in that area.  For example, a female human fighter cannot have as high of a score as her male counterpart.  Keyboard shortcuts will also feel a bit dated, and on certain laptop keyboard layouts, can actually be frustrating.

Despite these limitations, players who take the time to learn the rules will find a deep system at play here.  The game not only provides several choices for both races and classes, but allows different players to multi-class or change class (depending on race).  This opens up additional strategic options for creating a highly effective combat unit.  It is good that the game does so, because the core experience revolves around fighting.  Proper planning, preparation and effective are key to victory.

Pools of Radiance is no stranger to the term “epic fight.”

Combat takes place on a two-dimension board, replicating the pen and paper experience.  Characters take turns with enemies based on an unseen initiative order.  Fighters hold down the front lines with their high armor, while rogues sneak around enemy flanks searching for opportunities to backstab their hapless victims.  Clerics heal and buff party members while wizards fling deadly spells, including area of effect fireballs, and crowd controlling clouds of poison.  Using the simple environment effectively provides more strategy.  For example, funneling an enemy down a narrow hallway may limit the pain party members expose themselves to each turn.  The deep combat system, paved the way for later games, though console gamers would not find something quite this strategic for some time.

Outside of combat, the party will interact with NPCs from a limited list of options, taking quests and gathering information.  Exploration plays a key role, both in the overworld and in dungeons.  Pools of Radiance provides us one of the earlier examples of ‘open-world gaming’ as the overwold allowed players all kinds of freedom to get into trouble.  Players also have options in which order they tackle quests.

With that said, the automap, while ahead of its time, feels quite limited today as it shows little information.  Furthermore, it does not function in some areas, requiring players to draw a map on paper similar to the original pen and paper experience.  Other old school frustrations can creep in, as well.  Players may easily lose track of their current mission, or miss a critical item or clue along the way.  Thankfully, the hint book (included in PDF format when you purchase the game from GOG.com) addresses all of these concerns head on, making it much more palatable for newer gamers to try one of the most defining games of its generation. 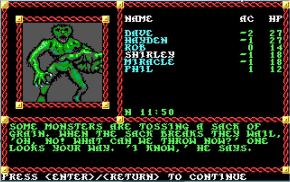 Some of the pixel art, inspired from the original books, looks great.

While well ahead of its time, Pools of Radiance lacks certain quality of living improvements seen later in the series.  The ability to rapidly heal party members while resting is missing here, forcing the player to heal each party member, one spell at a time.  The interface, which focuses on keyboard short cuts, works well enough, but it literally takes dozens of casts to heal up a higher level party.  Training halls are separated by class, requiring more micromanagement, and the game does not even tell you who is eligible until you try to train.  For the first third of the game, funds can be difficult to come by, meaning a party will often not have the needed gold to afford their training.

Despite these shortcomings, the deep combat will keep keyboard tacticians happy for a long time.  And for gaming historians, pushing through the above issues yields a trip down memory lane with a game that exceeded many expectations back in the day.  I enjoyed my time with the game, though after 15-20 hours, I was ready to move on.  That is why I give it my review rating of “Play It.” 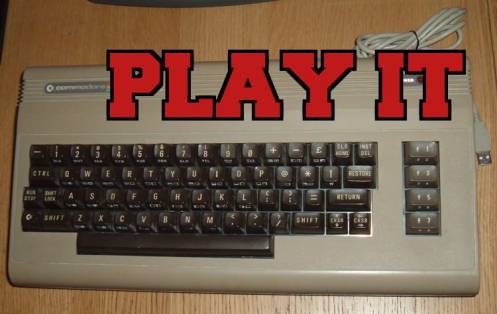 It’s Not All Fun & Games